Our team is right here to assist you

SERVING CLOUD NINE TO YOU

As a cabin crew member, you need to deliver excellent customer service to passengers while providing convenience & safety during the flight. Serving refreshments and food and selling gifts and duty-free things are parts of the job. The crew are trained to deal with security and emergencies and assist first aid to passengers.

You also must confirm that all emergency tools are in working order before take-off and enough stores on board. You'll allow passengers to board the plane and explain safety techniques and equipment.

Cabin crew bring out the instructions delivered by pilots or co-pilots outside the cockpit. They are also in charge of the safety and convenience of passengers on a flight, and they notify the passengers when necessary. Male flight attendants are known hosts, while female ones are named hostesses. The Air Hostess course teaches them to follow the specific rules of aviation organizations.

Working as a cabin crew for a primary airline is a thrilling and challenging experience. In addition to jetting off to exotic and luxurious destinations, the job also needs a high degree of responsibility and discipline to ensure the safety and convenience of passengers in line with industry regulations.

This course is perfect for young professionals looking to get a head start in the occupation, orienting the talents and responsibilities anticipated by the world's leading airlines. Particular focus is given to customer service and handling uncommon situations during flight, with the course's final module delivering helpful tips for completing the recruitment process. This course also contains a safety equipment procedure (SEP) trainer providing a summary of the aircraft, safety equipment, and emergency procedures available via web or mobile. 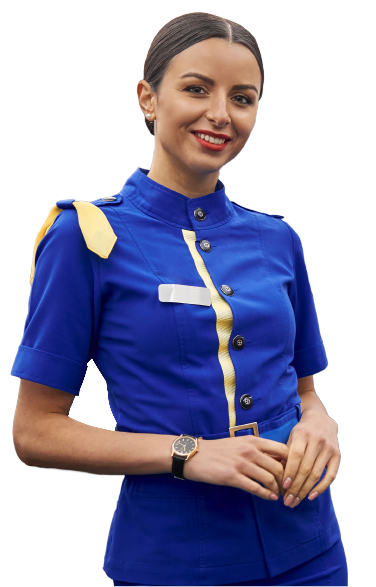 What you will learn

Age: Minimum age requirement 17 Years.
Eligibility: 10 + 2 examinations passed in any discipline from a recognized board or university or diploma, degree in any stream.
Medical Fitness: Medically fit and doesn't have colour blindness or any other physical disabilities.

They are in charge of the cockpit door to the back kitchen area. The cabin crew is not liable outside the aircraft or inside the cockpit.

As an air cabin crew, you'll require to:

Rise for air cabin crew is based on experience and execution. From the part of a cabin crew member, it's possible to progress to the role of purser or chief purser - the label given to the chief flight attendant.

Pursers have the exact responsibilities as the general cabin crew but are also provided with the management responsibilities of a particular cabin, such as first-class or business class. As a purser, you'll make sure that all teams within your cabin have the highest level of customer service while promoting the sale of duty-free items. Most airlines need staff to have between two to five years of experience and knowledge to become a purser.

From the role of the purser, you can advance to a senior cabin crew. This place is known at some airlines as cabin supervisor or cabin service director. The part is very identical to the pursers. Besides, you'll have accountability for all cabin crew on board, not just in one specific cabin. All cabin crew and the purser/chief purser will notify you. You'll usually be concerned with cabin crew training courses, supervising recruits, and providing all relevant paperwork at the end of the flight.

Some air cabin crew may also desire to become a significant (VVIP) cabin crew. This work is carried out with important private clients, usually on private aircraft. The clients are generally prestigious and may contain government officials or royal families. The highest level of assistance is expected, and employers need at least two years of experience performing in premium (business or first) class. Multiple VVIP positions are based in wealthy areas of the Middle East.

There are jobs open in private abroad based airlines due to the incremental globalization and open sky policies, which call for improving liberalization. Flight attendants are likely to rise with the increasing number of airlines' fleets. Private air fleets, which have worked in other countries like IndiGo, Singapore Airlines, etc., create a lot of recruits.

In the contractual qualities of an air hostess, their work in the sky is restricted to 8-10 years in the government sector. Afterwards, they can be in charge of assignments such as training of recruits, administrative jobs, etc. They can also develop their portfolio as they have earned much experience over the years. After serving as flight attendants, hotel hospitality, media, and travel tourism are other places available.

Being part of the cabin crew is a chance for a special few. Not only should one have a friendly and kind person, but they ought to be calm and organized in all sorts of scenarios. They should make a sound decision and existence of mind in every condition. Confidence and an optimistic attitude are the key and are the most precious qualities. Possessing an understanding of many languages is a plus. Cooperation and teamwork are talents one must have in spades as the nature of the job requires them. A professional attitude and hard work are a must for evolving as a cabin crew.

WIIA is a Cabin Crew Training Institute in Ahmedabad that provides the Air Hostess Course. We acknowledge that an industry-ready student creates a great professional and can claim to have cracked the code of victory of our previous students in the Aviation to our industry-ready infrastructure and 'Practical Training' facility.

Our team is right here to assist you